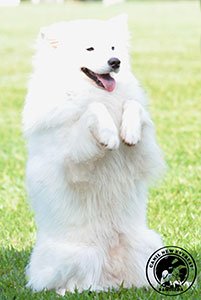 The Samoyed dog attracts much attention for its beauty and it is also considered a great companion dog. It is very active and playful. There are several features of this ancient dog. Its features range from the various functions that its coat develops to its extreme docile behavior. This is a dog of average size, strong body, muscular and well balanced. Considered by many people one of the most beautiful dog whose breed is characterized by an alert and happy expression which has earned the nicknames "Sammy Smile" and "Smiley dog".

Origin - The Samoyed originated in northern Russia and Siberia. Its name in the country of origin is SamoiedskaÃ¯a Sabaka. This is one of the oldest dogs known. It descends with total purity of its ancestors that followed the migrations of Samoyeds. It is one of the typical races of Siberia whose origins should be rescued in prehistory. This ancient union with the man gave this race a domesticity perhaps unique among animals. Esteemed by many as one of the most beautiful dogs in the world, the Samoyed was introduced in England for over a century and since then figures among the most extraordinary dogs posted of cinofila exhibitions. Note: Read the origin of the Samoyed in "History"., too. Coat - The Samoyed is a dog with a double coat with a short undercoat, dense, soft and external fur is longer, rougher and straight. The race developed this undercoat, almost impenetrable to resist polar weather, and even a longer fur coat resistant to water, land and snow. The coat of the breed has water proof grease that prevents the establishment of dirt, so it is very important to avoid excessive bathing, even in hot weather because the hair in constant contact with water loses the oils and could cause even fungi and widespread skin problems. The ideal is more regular .
His coat is white as snow, abundant in Siberia, its place of origin, where they were used as reindeer herders, guards and companion dogs to pull the sleds. There is also beyond the pure white color, the color white with cream, the cookie (the background color should be white with some brands cookie). It should never give the impression of being beige.
Around the neck and over the shoulders, the coat forms a mane, framing the head, especially in males. In the head and the front faces of the members, the hair is shorter and straight, the external face of the ears, the hair is short, hairy and smooth. In the inner ear is well-stocked. On the back of the thighs, the hair forms breeches. In inter digital spaces are the hair protection. The tail is richly covered because it is used to cover the nose during extreme cold in order to act as a pre-filter to warm and humidify the air that inhale. In females, the coat is often shorter and softer texture than in males. The correct coat texture should always have a special glistening sheen. . The Samoyed is the only race in the world that has no peculiar smell of dog in his coat. The only smell that has Samoyed, is found and produced between the pads of the toes, which actually serves to mark the path he trod. The hair found between the pads of its fingers also serves as traction on icy and slippery trails..

Temperament and personality - The Samoyed is a dog that really loves to "talk" with their owner. In this talk he may be asking or complaining about something! It is always very friendly, honest, alert and lively. The hunting instinct is very slight. It is neither shy nor aggressive. It is very social and because of that it can not be used for guard duty. A Samoyed is able to do everything to be in the company of its owner! It is very faithful, loving and gentle! It is not aggressive, has a calm behavior, however, it has a strong personality. You can have a Samoyed in apartments as long as its owners take a walk every day. The Samoyed is a very curious dog and loves to play. Learn easily. Perhaps because of its long association with humans is a perfect pet for company, not being a destroyer as long as it is in companion and receives attention from its human family. It suits perfectly to apartments and houses. The adaptation with children is perfect!